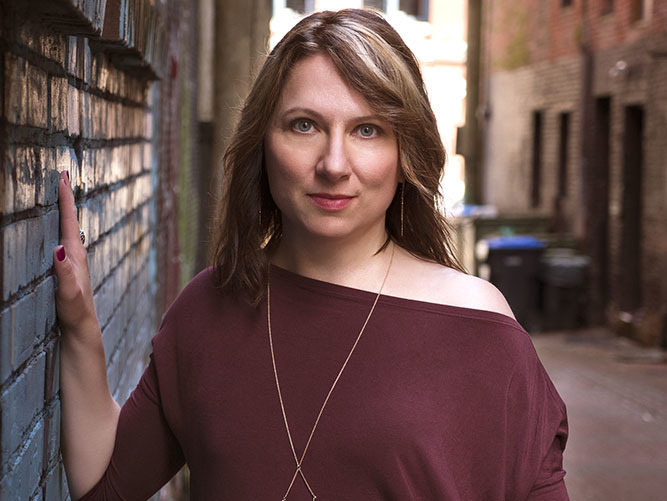 LJ Mounteney has been singing ever since she can remember.  Born in Edmonton AB, LJ got her start in singing in Creston BC after her family moved there in her teens.  Leaving the Kootenays for the West Coast, Mounteney enrolled in Vancouver Community College’s rigorous Commercial and Jazz Music program and from there began to gig locally singing a wide variety of jazz, blues, pop and R&B.
In 2017, Mounteney produced her first album, Here in the Dark, with fantastic local session players including the brilliant work of guitarist Jon Roper.  The album features eight classic, well loved cover songs as well the title track - Here in the Dark - an original story with haunting lyrics written by Mounteney and co-arranged by Roper.  Here in the Dark has received radio play on CBC’s Hot Air, CITR, Pacific Northwest Radio and Coop Radio.  Mounteney and Roper are currently co-writing and producing an EP of originals slated for release in 2019.
As a live performer, Mounteney considers herself fortunate to have worked alongside some of Vancouver’s finest musicians and groups and she has been inspired in the jazz vein by international heroes like Dee Dee Bridgewater, Betty Carter, Chet Baker, and in the gospel and blues vein by Bonnie Raitt, Etta James, Aretha Franklin and Mahalia Jackson.  Mounteney was recently a featured artist in the Strong Women, Strong Music series held at Frankie’s Jazz Club in March and she returned to Frankie’s in May with her own Quintet.
A true artist, Mounteney easily builds and maintains a connection with her audiences. In a lush, clear voice she weaves magic telling her own truths through the power of song.
Links to Vids:
Album Medley:
Short Medley
One Note Samba:
Purple Rain Live at Frankies:

Contact the person who sent you here for booking information

is an agent friendly talent resource where you can experience top-shelf performers easily and quickly. Contact the person who sent you here for more information on pricing and particulars. No contact info or pricing on this site!